As part of the West Palm Beach Permanent Art Collection, HYBYCOZO's Deep Thought may be the largest triambic icosahedron ever built. 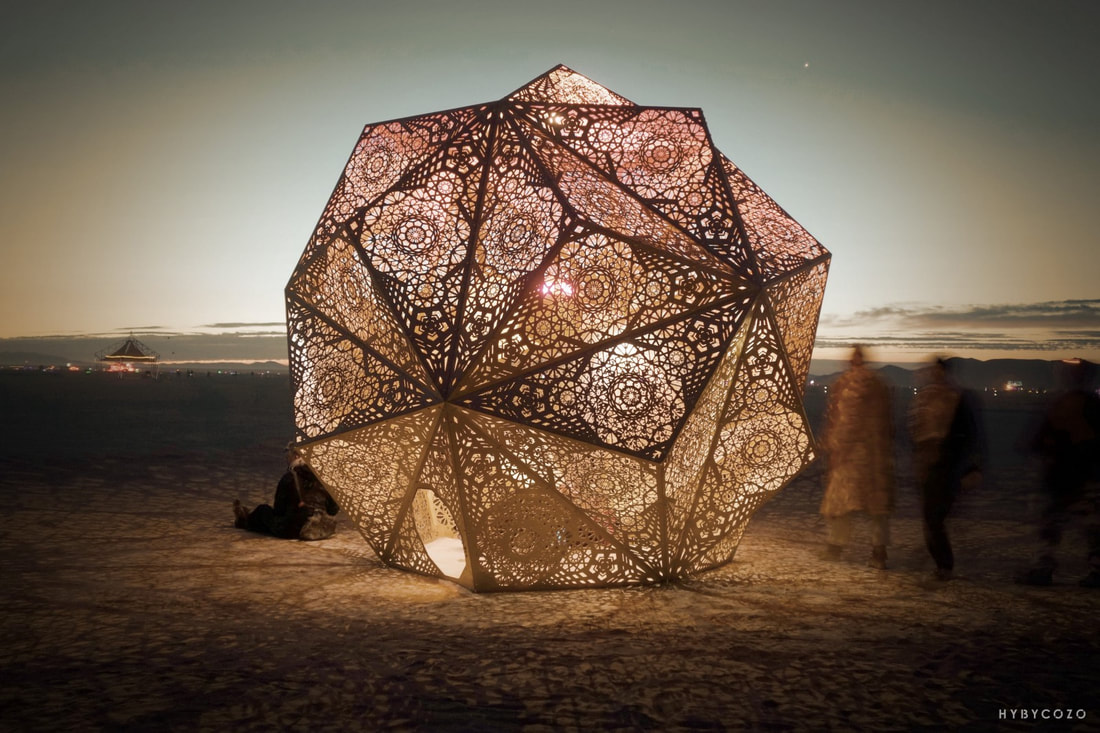 A 60 sided regular polyhedron that was over 15 tall and weighed over 3500 lbs (we are checking with the Guinness Book of World Records). Our sculpture and ode to the mathemagicians who stood before us studying the very fabric of mathematics and matter, stands at just over 15 feet tall. It holds 15 people inside.
The more interesting aspect of the structure, however, may be that the the pattern on these 60 panels represented what was once thought to be an impossible mathematical concept, the quasicrystal. It was discovered in 2D in the 1970s by Roger Penrose, discovered in 3D by chemist Dan Scheterman winning him the Nobel prize in 2011, and then once again encountered in 2 separate instances on a meteorite site in Russia.

Say that again?
​
Quasicrystal a form of aperiodic but infinite tiling that lacks translational symmetry. This ‘forbidden geometry’ was considered so impossible that Dan Scheterman, while researching them in the 1980s, was forced to take a sabbatical from his research group because he was leading to embarrassment and ridicule from the international scientific community.
It was on this sabbatical that he discovered this new state of matter and made a huge stride in material science.

The Nobel Committee at the Royal Swedish Academy of Sciences said that “his discovery was extremely controversial,” but that his work “eventually forced scientists to reconsider their conception of the very nature of matter.

This concept of pursuing truth against the grain is a very powerful metphor for us HYBYCOZO. It inspires us to follow the path of scientific inquiry and pursue our passions for mathematics and geometry.

The pattern won the Nobel Prize in Chemistry in 2011 and then subsequently was discovered in a meteorite which landed in Russia, proving that this sacred geometry might just have extraterrestrial origins.

A crystal diffraction of a quasicrystal. Blink quickly!